UPDATE: Early Borderlands 3 reviews have gone live on PS4, Xbox One and PC.

IGN – 9/10: “The sheer magnitude and diversity of its arsenal of fun and surprising weaponry is unmatched, and the striking amount of loving detail and variety packed into its energetic and replayable 30-hour campaign is what makes Borderlands 3 a high-point for the series – and the genre as a whole.”

Polygon’s review is slightly less flattering: “The franchise used to feel adventurous. Now, without any fresh ideas or concepts, it’s little more than a holdover from a different time. Borderlands 3 feels safe, oddly careful (especially for a game about anarchy), and, worst of all, corporate.”

ORIGINAL: Borderlands 3 review scores are about to go live for PS4 and Xbox One.

The good news for fans is that review scores will go live at 3pm UK time on September 9.

This means you’ll have plenty of time to research the game ahead of its September 13 release date.

But the bad news is that only a handful of sites will be posting reviews ahead of launch.

According to a post on VG247, 2K Games has only sent out review codes to a select few US sites. This is due to security concerns ahead of launch later this week.

Express Online will update this article once the review scores have gone live.

One thing that is for certain is that fans can expect plenty of looting and shooting, not to mention four new Vault Hunters and co-op action for PS4, Xbox One and PC.

“The original shooter-looter returns, packing bazillions of guns and a mayhem-fuelled adventure!” reads the official description.

“Blast through new worlds and enemies as one of four new Vault Hunters. Play solo or with friends to take on insane enemies, score loads of loot and save your home from the most ruthless cult leaders in the galaxy.”

Described as a “mayhem filled thrill ride”, the game tasks players with stopping the Calypso Twins from uniting the bandit clans.

UK fans will be able to pick up the new release a few hours ahead of launch by visiting GAME’s flagship store in Westfield Stratford.

Customers can head to the London store on September 12, where they can purchase a copy of Borderlands 3 at 9pm UK time.

The store will be transformed into a “Pandora-themed wonderland”, complete with Borderlands 3 artwork and a Psycho-Bandit statue.

Borderlands 3 cosplayers will also have the opportunity to win a 50-inch Samsung TV, as well as a PS4 Pro and Borderlands 3 merchandise.

The game releases in full just a few hours later at midnight on September 13.

That’s according to 2K Games, which has published global launch times and pre-load information for the upcoming shooter.

November 28, 2020
Black Friday – the humongous pre-Christmas sale event – is finally here. The US import, which sees retailers slash prices across a wide range of... 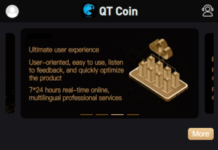 The Greatest Gift I Ever Received: How Living with Mental Illness...