Wordle 557 is live for the next 24-hours, so act fast if you want to solve the teaser and keep your winning streak alive. Of course, when you’re dealing with a puzzle this difficult, that’s easier said than done. Indeed, if you’re struggling with Wordle 557 on December 28, head to the bottom of the page for a selection of spoiler-free hints and clues. Good luck!

The perfect game to play over breakfast or lunch, the aim of Wordle is to figure out a five letter word in just six guesses.

To solve the puzzle, you’ll need to pay close attention to the colour of the tiles. If the tile turns grey, then the letter you’ve guessed doesn’t appear in the final word. If it turns yellow, then the letter appears in the word, just not in that position. A green tile means the letter is in the word and in the correct place.

An addictive game with a huge following, Wordle would go on to spawn dozens of clones.

There’s a Lord of the Rings themed Wordle called Lordle, a musical variant called Heardle, and a hardcore Wordle game called Quordle – where the aim is to guess four words instead of just one.

If you’re not great with words, then you’ll prefer something like Nerdle, where you’ve got to figure out a maths equation.

If you’re here for Wordle 557 hints, check out the latest clues for the December 28 puzzle below…

3. To drive, force or urge somebody to do something.

Biking Exchange will officially open the first round of public sale... 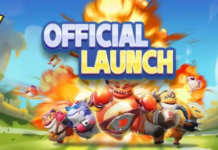 Belem has obtained the US MSB license and accelerated the pace...